DALLAS, Texas /ScoopCloud/ -- Texas ranks number 2 with the highest number of child marriages. Child bride survivor, Trevicia Williams, helped lawmakers outlaw forced marriages in Texas and step in the direction of ending child marriages when she courageously became the face of the problem as she shared her jaw dropping testimony, and, on June 1, bolstered her advocacy work by writing a heartfelt letter to Governor Greg Abbott urging him to sign SB 1705.

She shared how, at 14, she was picked up from high school by her mother, carried to Justice of the Peace court, married off to a 26 year old man recently out of prison, and, slept on the floor of the church that helped arrange the marriage. On the list of new laws in Texas effective September 1, is a stricter marriage law; however, 16 and 17 year olds can still marry with the approval of a judge or if they have been legally emancipated from their parents.

Williams says there's still work to do. "Most women that I've coached during my 'I Love You, But, I Can't Stand You Right Now' healthy mother daughter relationship seminar admit that they were not psychologically mature enough to handle being in a serious relationship during their teenage years and want their daughters to enjoy being girls," says Williams.

A Frontline.com report shows that over 200,000 child marriages have taken place in America since 2,000, 90% of them being girls. Texas is on America's leader board with some 40,000 children under the age of 18 married between 2000 and 2014. Williams feels strongly that the minimum age for marriage should be at least 18 in all 50 states.

She recently served as a panelist during a Tahirih Justice Center sponsored Falling Through the Cracks: A Conversation on Child Marriage in Today's America consultation that was moderated by renowned journalist Gayle Tzemach Lemmon. of PBS, noting that "Child marriage is a mindset problem that must be changed." Understanding the power of a survivor's voice and story, she also shared her written testimony with Florida legislators during their October 24th hearing on SB 140 on banning child marriages which was unanimously voted in favor of. The new law would mandate that the minimum age for marriage is 18 with no exceptions.

"As with my experience, girls who are in underage marriages suffer many things including domestic violence, restrictions on access to education, stifled social development due to isolation, fewer opportunities to grow and advance, poor and inadequate health care and lack of knowledge about their rights," said Williams.

There are many consequences associated with early marriage. Domestic violence is one of them. All too often, the public hears stories about domestic violence involving adult women like the recent news about Ezekiel Elliott and ex-girlfriend, Tiffany Thomas. Those stories are awful and unacceptable. Adding to the issue, few people know the number of underage girls who are in arranged and forced marriages and suffering domestic violence.

Williams said that her own experiences of being physically and psychologically abused during her child marriage and pregnancy is another reason that she became the face for the child marriage problem in Texas. "Domestic violence within child marriages is yet another way that the inherent vulnerabilities of underage girls is violated," says Williams.

"Not only was parental consent a mask for coercion and child abuse, it was also robbery of my childhood...years of normal academic, social and life skill developing teenage experiences that I can't get back," says Williams.

Consent is another aspect of child marriages that's oftentimes overlooked. Whether you're talking about Bill Cosby, DeMario and Corrine on Bachelor in Paradise or Savannah, the Alabama teen who reported being raped by a popular football player or a child bride, consent is the focal point. Many states have established an age floor for sexual consent between 16 and 18, but, child marriages enable people to bypass statutory rape laws.

"Being a high school freshman should have been a prohibitive factor to me becoming a child bride. However, due to Texas' parental consent legal loophole that was previously on the law books, it wasn't. Now, it is, and, I'm happy about what that means for protecting the childhood and potentials of girls all over Texas," said Williams.

About Real Beauty Inside Out:

Trevicia Williams, Ph.D., a child marriage survivor, advocate and motivational speaker, went on to found The Institute for Full Potential Living through which she runs a program called Real Beauty Inside Out to foster healthy mother, daughter and family relationships. She has helped countless moms and daughters work through their differences through her popular, "I Love You, But, I Can't Stand You Right Now" seminars and book. She also inspires, motivates and empowers women, staff, and, members of organizations through her inspirational speeches and learning and development training at conferences throughout the year. 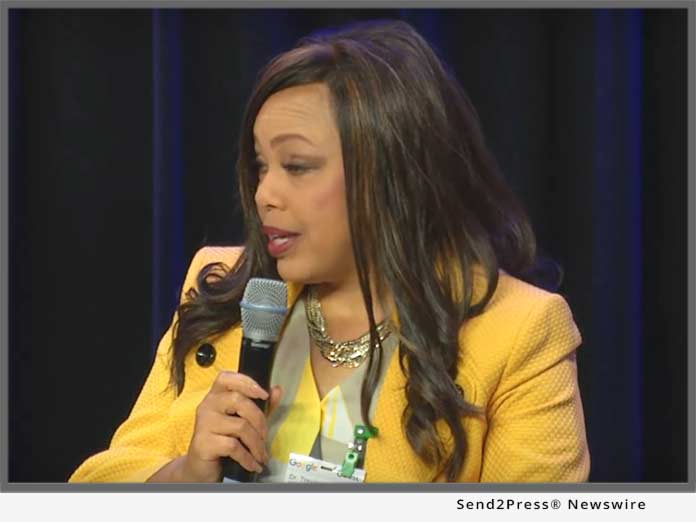 Texas ranks number 2 with the highest number of child marriages. Child bride survivor, Trevicia Williams, helped lawmakers outlaw forced marriages in Texas and step in the direction of ending child marriages when she courageously became the face of the problem as she shared her jaw dropping testimony, and, on June 1, bolstered her advocacy work by writing a heartfelt letter to Governor Greg Abbott urging him to sign SB 1705.