"As a combat pilot, and later as a national security advisor to President Donald Trump, I've spent my life defending this country," said Pfluger. "Now I'm running for Congress to defend our traditional Texas values and stand up for the things that have always made this country great: family, faith, and freedom."

As a seventh-generation Texan, August learned the value of a hard day's work on his family's ranches in Kimble and Concho counties. Those early West Texas values led August to a life of service and leadership - he earned his Eagle Scout badge at the age of 15 and was later named as captain of the varsity football and baseball teams at San Angelo Central High School.

After high school, August followed in his grandfather's footsteps and answered his nation's call to serve.

Upon graduating with honors from the U.S. Air Force Academy, Pfluger went on to serve his country in uniform for nearly two decades - commanding hundreds of combat airmen and women and serving in the Pentagon and NATO Command. Today, Lieutenant Colonel Pfluger is a decorated combat veteran with over 300 hours of direct action against radical jihadists in the Islamic State in Iraq and Syria (ISIS).

In 2019, August was called to serve his nation in a different capacity - as a national security advisor in the White House. As a member of President Donald J. Trump's National Security Council staff, August was entrusted with our nation's highest security clearance and charged with advising President Trump on a host of foreign and domestic threats to our nation's security.

"My family and I are truly humbled by the outpouring of support for my campaign from so many members of the community," continued Pfluger. "I want to thank everyone for the countless calls and texts I received encouraging me to defend our shared values in Congress...I will not let you down."

Today, Pfluger lives in San Angelo and works in his family ranching business in Kimble and Concho counties. August still serves as Lt. Col. in the U.S. Air Force Reserves and recently founded an energy investment company that operates in the Permian Basin. August holds two advanced degrees in aeronautical sciences and military strategy and is completing a third Masters Degree in International Business and Policy at Georgetown University.

August is a conservative Republican, a proud husband and father, and a devoted follower of Jesus Christ. He met his wife, Camille (also a native Texan) at his family ranch in October 2000. They have three young daughters, Vivian, Caroline, and Juliana. In his free time, August enjoys coaching his daughters' youth soccer teams and leading Bible study groups for military service members - something he's done at every base he's been stationed.

In the weeks ahead, August will be traveling across the 29 counties of TX-11 to meet with supporters, listen to the concerns of his future constituents, and share his plan to bring strong, conservative leadership to Congress.

Paid for by August Pfluger for Congress. 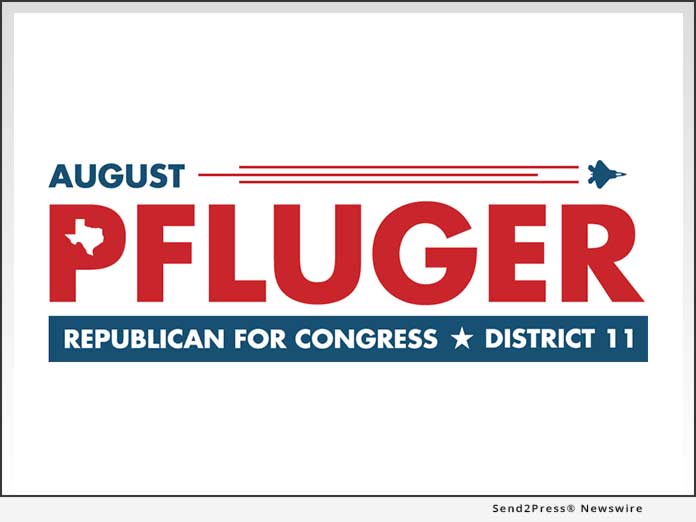 Today, August Pfluger (R-San Angelo) announced his campaign to represent Texas' 11th Congressional District in the U.S. House of Representatives. For nearly 20 years, Pfluger has served his country as an elite F-22 fighter pilot, a decorated Air Force officer, and most recently, as a key national security advisor to President Trump.