In choosing Guardian Angels for this distinguished award, the board of governors of AUSV state: "Recipient (GAMSD) has made a significant difference in the lives of veterans whose wounds can't be seen. Recipient has provided services/methods to replace feelings of despair with hope."

Carol Borden, Founder and Chief Executive Officer said: "We're just so proud of everyone connected with our organization. From staff to volunteers and foster trainers, everyone involved truly cares about making a difference for our veterans and first-responders. It is a great honor to have our work with veterans recognized by the Academy of United States Veterans."

Guardian Angels Medical Service Dogs was honored to stand beside several deserving veterans' charities, veterans, and individuals who were also recognized at the black tie gala, including:

Actor Mike Vogel, who along with Veteran and Bronze Medal Recipient, Matt James presented the award.

Academy of United States Veterans (AUSV) established the annual VETTY awards to recognize those that contribute to the well being of the veteran community.

Our acceptance speech can be viewed on our website at: http://www.medicalservicedogs.org/vetty-award-acceptance-speech-2018/.

Guardian Angels receives up to 40 inquiries each day for one of their medical Service Dogs. There is no state or federal funding available for this critical life-saving program. Since their inception in 2010, Guardian Angels has paired more than 220 individually trained medical service dogs with those in need; and with your help, they can do even more.

For more information on our program, visit: http://www.medicalservicedogs.org/. 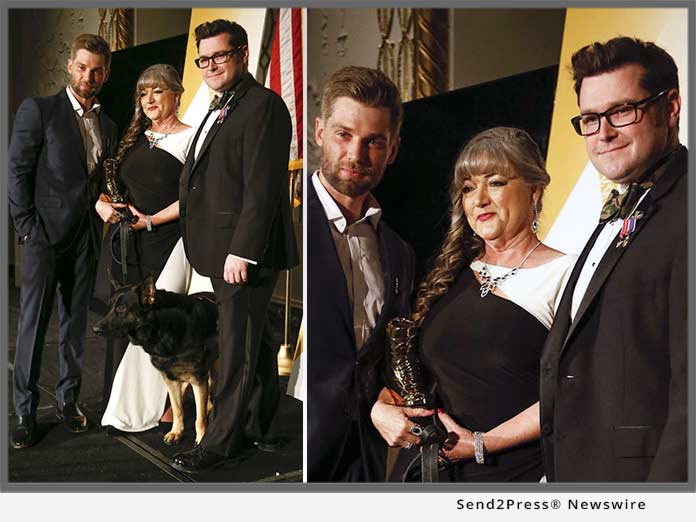 Guardian Angels Medical Service Dogs, Inc. is a national 501(c)(3) non-profit, located in Williston, Fla. On January 20, 2018 its Founder and CEO, Carol Borden and National Canine Program Director, Nate Burney were at the Mayflower Hotel in Washington, D.C. to accept the 2018 VETTY Award for outstanding efforts in Veterans Mental Health.