ROCKPORT, Mass. /ScoopCloud/ -- A documentary film dealing with the devastating impacts of federal regulations on the lives of New England ground fishermen, "Dead in the Water," produced and directed by Rockport native and professional filmmaker David Wittkower, will be screened for the first time in public in Rockport, Massachusetts on Nov. 18.

"Dead in the Water" was two-and-a-half years in the making and is Wittkower's fifteenth documentary film.

The film was shot in different coastal towns and it features scenes and interviews with area fishermen, their spouses and other family members; advocates for fishermen; elected officials; and community activists.

"This film opens the doors for the world to see how difficult and dangerous the life of a fisherman is," said John Bell, a former three-term mayor of Gloucester (2002-08). "On top of that, the impact of misguided federal regulations on fishermen has never been presented as powerfully as it is in 'Dead in the Water.' This film packs a real punch. It stays with you long after you've seen it."

Wittkower, a graduate of the American Film Institute as a cinematographer, who's been living and working in Los Angeles since 1981, describes "Dead in the Water" as an examination of "the relentless destruction of the New England ground fishing industry through government regulations, bad science, and the growing, but mistaken, belief that everything has been overfished and there aren't any fish left in the oceans."

The idea for the film came from a casual conversation he had on a sidewalk in Gloucester three years ago. "I was back in Rockport on a visit and I drove into Gloucester and noticed there were very few fishing boats in the harbor," Wittkower said. "I asked someone, 'Where's the fleet?' and he said, 'What fleet? The fleet's been dwindling for years, and this is what's left.'"

He started asking more questions about the plight of the town's fishermen and was soon directed to Angela Sanfilippo, the longtime president of the Gloucester Fishermen's Wives Association. Sanfilippo encouraged him when he raised the possibility of telling the story of the vanishing fleet of ground fishing boats and their crews on film.

"I could see that David was sincerely interested in this topic," said Sanfilippo, "and I quickly figured out he had the skills and track record to make a serious documentary on it, a film that could generate a lot of interest, here and elsewhere."

The Gloucester Fishermen's Wives Association decided to help and support Wittkower as much as possible. "The first time I saw the rough cut of 'Dead in the Water,' I knew we had done the right thing," said Sanfilippo. "This is something special."

One of the many friends and professional colleagues of Sanfilippo who appears in "Dead in the Water" is J.J. Bartlett, President of Fishing Partnership Support Services. He notes that physicians who have studied the physical and emotional effects upon ground fishermen of the changes in the industry "have concluded that 87 percent of them are suffering from symptoms of post-traumatic stress disorder (PTSD)."

Bartlett said, "When you watch 'Dead in the Water,' you'll understand why that's so. And you'll leave the theater wanting to tell your friends, 'You have to see this film.'"

Following the premiere in Rockport on Nov. 18, Wittkower is planning a tour where he will show the film in multiple locations and to a variety of audiences. That tour will begin in Massachusetts, with subsequent showings likely in Boston and New Bedford, and will extend to Maine and other coastal states. Simultaneously, he will be trying for a nationwide showing by getting the film on HBO, Netflix or Amazon.

"Dead in the Water" is Wittkower's fifteenth documentary film. He has won many awards for his work, including one from the National Cowboy & Western Heritage Museum for a film he did on Lane Frost, a famous rodeo bull rider who was accidentally killed at a riding event. He's hoping now that "something better than an award" will come from his latest project.

Said Wittkower, "I'm hoping to increase public support for U.S. fishermen. I want to help keep fishing jobs in this country. If 'Dead in the Water' can do that, I'd be pretty happy."

The film was recently accepted as Official Selections into the Depth of Field International Film Festival competition under three categories: Documentary, Direction and Cinematography.

A trailer of the film can be seen at: https://youtu.be/RNGXvzBaamk 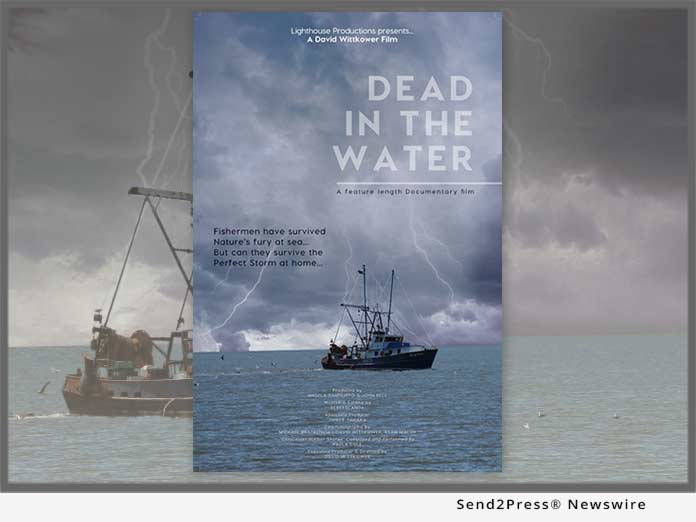 A documentary film dealing with the devastating impacts of federal regulations on the lives of New England ground fishermen, "Dead in the Water," produced and directed by Rockport native and professional filmmaker David Wittkower, will be screened for the first time in public in Rockport, Massachusetts on Nov. 18.