TAMPA, Fla. /ScoopCloud/ -- When Olivia Norem first heard the narration of the book, "His Viking Bride," she was so caught up in the story she nearly forgot that she is, in fact, the one who wrote it. And this marketer turned author is not the only one who found the audiobook captivating.

On March 4, 2019, Norem received word that her audiobook was the winner of the Audio Publishers Association's prestigious Audie Award in the Romance category. It was also the only self-published book in the category going up against the likes of Penguin Random House, and Harper's audio divisions.

"His Viking Bride" is a love story that is described as: "filled with folly and challenge, wit and passion ... with two iron-willed characters who share more than their explosive traits, the ecstasy of all-consuming love."

"When you spend months writing a novel, you become consumed by it - so you may not always be able to look at the finished product objectively. But hearing Greg Patmore's narration the first time, I knew for sure it was a marriage of great words with a truly gifted voice actor," Norem explained. "The Audies are akin to the Oscars for us in the audiobook world so when I entered it to the APA award competition, I did it on a whim. I honestly didn't think I had a shot for such an elite award, especially up against competition from big-name publishing houses."

And that skepticism is understandable. According to a recent article in the Wall Street Journal and data from Edison Research, audiobook sales were up about 20 percent year over year across the publishing industry in the first eight months of 2017 while print sales rose just 1.5 percent and e-book sales dropped by 5.4 percent during the same time period. The research says that is, in part, due to changes in consumers' listening habits that includes increasing use of smart speakers, airpods, wearables and smartphones. That all translates to big business for established publishing houses - with the American Publishing Association reporting a nearly 34 percent increase in the number of audiobooks published in 2018.

Norem's 30 years of corporate advertising and marketing experience and know-how came in handy, though. It leveled the playing field a bit against the big publishers when it came to promoting her product - an advantage that many independent publishers do not have.

"For me, writing is a reward in itself. Yet, winning the Audie Award reinforces I took the right risks in pursuing a passion and it is truly an honor to be recognized by the APA for my gift of words brought to life with Greg's outstanding performance," she said.

"His Viking Bride" audiobook is available on Audible for $24.95 at: https://www.audible.com/pd/His-Viking-Bride-Audiobook/B07B1HX4GK 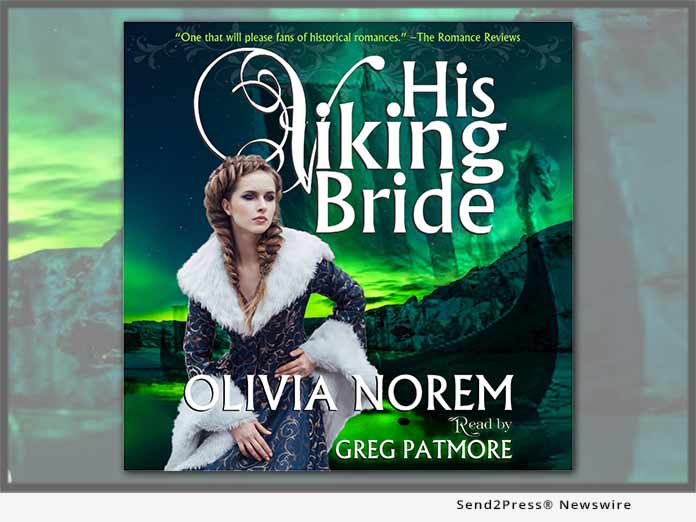 When Olivia Norem first heard the narration of the book, "His Viking Bride," she was so caught up in the story she nearly forgot that she is, in fact, the one who wrote it. And this marketer turned author is not the only one who found the audiobook captivating.