PHOENIX, Ariz. /ScoopCloud/ -- RestaurantOwner.com has released the report of their 2018 Independent Restaurant Outlook Survey. The report summarizes input gathered from over 880 independent restaurant owners and operators regarding their 2017 financial performance as well as their 2018 expectations.

A copy of the survey report is available at: https://www.restaurantowner.com/public/2018-Independent-Restaurant-Outlook-Survey-Report.cfm

Profitability is on the rise as many independent restaurants performed better in 2017 than the previous year. 62% of respondents reported that their net income in 2017 outpaced their 2016 net income. Only 16% reported no change, and 22% reported lower net income in 2017 compared to 2016, indicating an overall upward trend in performance.

For operators who are optimistic, over half (68%) attributed their optimism to improved business practices or systems. Over half (61%) of those who are not optimistic attributed it to challenging labors costs.

Independent restaurant operator goals reflect their optimism for 2018. Most (82%) identified four or more goals, indicating a desire to improve and grow in the new year. Over 50% of respondents reported they intend to focus on improving profitability, business practices, guest experience, or staff training, or that they are going to reduce their costs in 2018.

About RestaurantOwner.com:
Since 1998, RestaurantOwner.com has provided proven resources to independent restaurant owners and managers who want to improve their leadership and business management skills to create a more consistent, higher quality guest experience, greater employee engagement and better financial results. 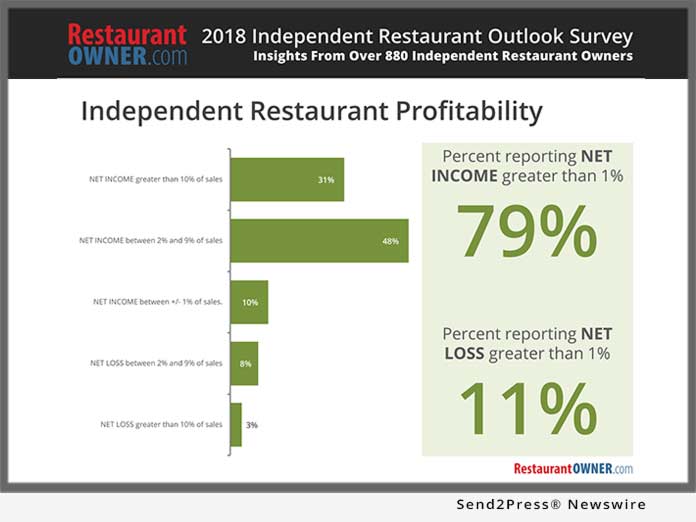 RestaurantOwner.com has released the report of their 2018 Independent Restaurant Outlook Survey. The report summarizes input gathered from over 880 independent restaurant owners and operators regarding their 2017 financial performance as well as their 2018 expectations.